This year, XQ launched our first ever districtwide collaboration. DC+XQ is a multi-year, community-driven partnership with the District of Columbia Public Schools (DCPS) to rethink what high schools can be for all students and to come together to make those visions a reality.

The partnership involves every high school in DC Public Schools. We will partner with all DCPS high schools rethink how to make teaching and learning more engaging, rigorous, and relevant to students.

DC+XQ started by giving community the time, space, and support to step back and reflect on what’s working and what’s not, and then offering tools, coaching, funding, and professional development to redesign school models driven by community and student voice. We took the teams on inspiration visits to see and meet XQ schools in other cities. These visits gave design teams the opportunity to not just meet the founding faculty of other XQ schools, but to see other bold models through the lens of students who are now enrolled at each of those schools. Making the connection from ideation to actualization was powerful because it pushed design teams to go bolder, and bring more academic rigor to their own models. DC+XQ is about creating sustainable transformative models for today’s high schoolers—and all the classes that will follow.

Six of the 19 eligible DC high schools are applying to join the first cohort of schools, which will be chosen this fall and launch in 2022-2023. In July, we held a week-long DC+XQ Redesign Retreat where all six schools and their design teams came together for a final round of refinement to their models. They utilized deep feedback from coaches and content experts. Because youth voice and choice is a key design principle for XQ schools, and for DC+XQ, student feedback was essential during the retreat. Each team had at least one student member.

During the retreat, one team discussed whether to institute a senior capstone project as part of their new school model. The principal asked a student on the team if that approach would excite young people and prepare them for their futures in a rigorous and meaningful way. The student’s response:

“In my classes now, it feels like my path is already mapped out for me. But in this new school, I will be able to say for myself what my path is.”

After hearing from the student, the school realized it needed to update its capstone project design so it’s more grounded in the passions and interests of students. That’s the power of student voice and choice—and of instantaneous feedback!

Eighteen-year-old Leia, a rising senior at H.D. Woodson High School, said she felt like her team made a lot of progress at the retreat. She said their goal is “to become a student-led school. What that looks like is building student leaders to be at the forefront of changing the curriculum, making the curriculum, being teachers in their own classrooms, allowing them to have a voice.” 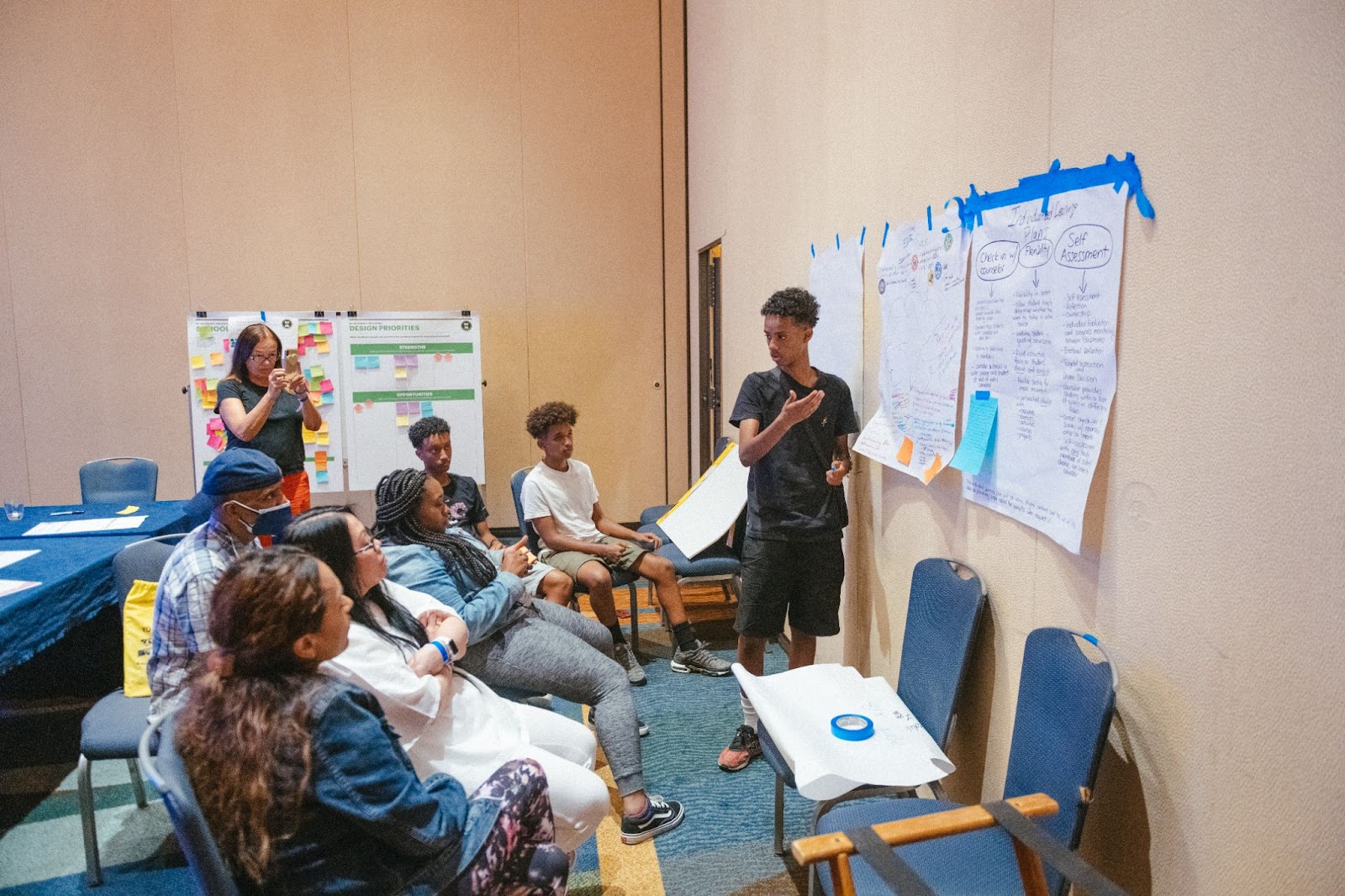 Since the retreat, all six design teams have submitted their final applications. They all have different ideas about transforming high school cited in their applications. For example, one envisions a greater emphasis on financial literacy, and another wants to use virtual reality in learning. But no matter the outcome, the seeds of inspiration are already taking root. Dunbar High School decided to end its uniform policy and stop collecting cell phones at the start of each school day. See Principal Nadine Smith’s message.

We also had the incredible opportunity to bring in external partners to engage in ideation roundtables with all six design teams. This work is hard, and partners helped take concepts to places that schools otherwise would not have reached alone. The diverse set of voices, expertise, and perspectives across the range of models made a huge impact on not just how teams were thinking about their design, but also on how to make designs living and breathing experiences for the end users: students. We saw this during Dunbar’s ideation roundtable, where we gathered leading experts in Afrofuturism—industry leaders who are making this cultural aesthetic come to life through arts, music, cuisine, and tech.

What we heard in the summer retreat shows what a meaningful opportunity this partnership has provided the schools:

We used to think that we couldn’t be BOLD because our ideas counter our current education system, but realized that the sky is the limit. It’s our job to dream BIG for our Young Kings attending Ron Brown Preparatory College High School!

Coming to the XQ Redesign Retreat really challenged me to consider what we truly mean when we talk about elevating the students’ voices. All too often we say that we want school to be student-centered, but rarely do we achieve that in practice. During the XQ Redesign Retreat it became clear to me that we can no longer be satisfied with lip service. We need to actually cultivate a mindset that recognizes who the most important stakeholders really are—the students.

The XQ retreat allowed Coolidge High School the opportunity to reflect and revise two key portions of our application: meaningful and engaged learning and our concept statement. The advice and feedback we received, along with team planning time, was instrumental to helping us strengthen key areas in our application.

For more on the DC+XQ partnership, check out these resources:

All photos by Shaughn Cooper When the COVID-19 pandemic forced a pivot to remote learning, the team at Latitude High School, an XQ school in Oakland, California, made an intentional effort to meet student… If learning can happen anytime and in any location, then we need to expand the definition of what ‘school’ is to transform the high school experience. By engaging the full… Transforming high school is hard work. The task can feel overwhelming and it can be hard to figure out exactly where or how to start. For XQ schools, the journey…