A mysterious Czech street artist has struck in Cedar Rapids, Iowa, scrawling his (or her?) telltale elephant tags throughout town – on take-out coffee cups, sidewalks, even a 60-foot replica of the Berlin Wall.

No one knows the identity of the elusive artist, who goes by the moniker Slon, but he has his own Instagram account, a lively, audacious style? and a few helpers from local high schools.

“We tell people we work with Slon. If businesses want him to come to tag their shops, we can arrange that,” said Lane Swartzendruber, a student at XQ Super School Iowa BIG in Cedar Rapids. “He’s already got some name recognition. He seems to be catching on.”

“Revolution Starts in the Streets”

Slon’s artwork is connected to a new art installation called “Revolution Starts in the Streets” at the National Czech and Slovak Museum and Library in Cedar Rapids. The exhibit — which celebrates the power of art to foment social and political change — features a foam replica of the Berlin Wall covered with colorful street art by Slon, visiting street artists, museum visitors, and students.

Swartzendruber and his Iowa BIG classmates helped the museum craft a marketing plan for the exhibit, and students from the STEAM Academy at nearby Metro High School helped design and build the wall as well as make Slon’s stickers, decals, and hundreds of origami elephants. (The elephants are an homage to famed French street artist Thierry Noir, who painted elephants on the real Berlin Wall in the 1980s.)

The Cedar Rapids exhibit opens April 27 and runs for six months, culminating on Nov. 9, the 30th anniversary of fall of the real Berlin Wall and the symbolic end of the Cold War. In Cedar Rapids, the day will be marked with an ’80s theme party at which revelers will tear down the foam wall, artwork and all. And Slon’s true identity will be revealed.

Street Art is Not Meant to Last Forever

At first, students were surprised to learn all their work — not to mention Slon’s — would be destroyed, said Sarah Henderson, K-12 learning specialist at the museum who worked with the students on the project.

“But I wanted the students to realize what street art is really about. It’s not meant to last forever,” she said. “Street art is about creating impressions, being part of a social movement. It’s meant to evolve.”

The project has academic elements, as well. Students are also learning the history and context of the Berlin Wall, and the role of walls, invisible and otherwise, in society generally — how they can divide people but also how people can unite to tear them down.

Art, of course, can play a key role in that — especially street art, which is highly visible, arises spontaneously and is anonymous. Done well, street art is a powerful way to resist oppression, give a voice to those who might not have one otherwise, and propel social change, Henderson said.

“I encouraged all the students to think of themselves as artists,” Henderson said. “And for the rest of their lives, they’ll know what the Berlin Wall was all about. My hope is that this project will have a lifelong impact.”

It’s already had an impact on Swartzendruber and his Iowa BIG classmates.They’ve learned how to create an in-depth marketing plan and work with their peers at Metro High, an alternative school, to bring it to life.

They’ve brainstormed about non-traditional marketing techniques, researched street art, written press releases, reached out to local businesses, and helped Slon create and maintain his Instagram account. For inspiration, they watched a documentary about Banksy, one of the world’s most famous street artists.

Kyle Duane Kazimour, a filmmaker and recent Iowa BIG graduate, is documenting the whole endeavor for the museum. He’s been inspired by the students’ creativity and how they’ve wholeheartedly embraced the themes of the project: artistic freedom and social change.

“Using street art to market an exhibit about street art — that’s just such a cool idea,” he said. “It’s been great watching it unfold. There’s been no wrong ideas. The students could really experiment.”

But perhaps most important, the project has been a lot of fun, Swartzendruber said.

This school empowers students to impact their community through real projects. Here’s what one teacher thinks about the next generation of students. 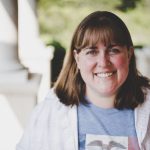