In addition to our work to rethink and transform high school in America, we’re committed to sharing the stories of people working for good in their communities. This is Dylan’s story.

“What you’re going through now does not define you. The work that you do now will help you foresee the future and you’ll be able to live out your dreams. That’s what my mom always told me when we were living in the shelter. She’d say, ‘Just keep pushing.’”

Homelessness among students in the US, the richest country in the world, is on the rise. Over the course of the three-year period between the 2014-15 school year to the 2016-17 school, enrolled students experiencing homeless rose by 7 percent.

That means, at last count, 1.36 million students in grades kindergarten through 12th grade currently experience homelessness, as reported by the National Center for Homeless Education.

It is an unfair obstacle to academic and financial success too often ignored by the concept of a meritocratic society, and whose effects are inextricably – and unfortunately – linked to present and future hardships, with students in the lowest family income quartile seeing their chances of earning a college degree by the age of 24 falling to just 9 percent.

For several months, his mother, his twin brothers, and he lived in a shelter. The time in the shelter led to a slide in his grades, as he was unable to keep to his studying schedule due to the curfew imposed by the shelter, as well as the fear of not knowing what was coming next.

He was able to overcome those circumstances by sticking to his belief in himself, saying “It taught me to be persistent,” he said. “Just because you hear ‘no’ once doesn’t mean you are going to hear ‘no’ again.” He also found additional support by reaching out to the educators at his school, an act that further highlighted his courage in the face of hardship: “I also opened up to my school because no one knew what I was going through. It became easier for me to handle.”

Simultaneously, his family found support through the Jersey City-based WomenRising organization, who helped placed them in permanent housing, providing Dylan with the much needed stability he’d sought while finding his way in the shelter system.

By enrolling in advanced placement courses over the summer, Dylan was able to pull his grades back up. And once on firmer academic ground, he started preparing to apply to college. Along the way, he took advantage of fee-waivers available to first-generation college students and those from low-income families, saying, “Even before me and my family were homeless, I always knew I wanted to go to college.”

When Dylan’s story was first shared with the world, he’d received acceptance letters from 17 colleges. But he was still holding out for his first-choice school.

We’re happy to report that Dylan finally received the letter he was hoping for and is now enrolled as a freshman at The College of New Jersey.

Advice for College Freshmen: 10 Tips to Prepare for Remote Learning 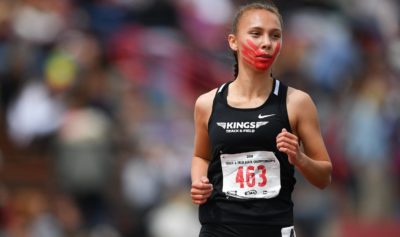 When Rosalie Fish stepped up to the starting line, she was preparing to run for more than herself and her school. Find out why. Everyday heroes are among us everyday — including in our classrooms. Here's one hero who teaches at a school in Nashville. Advice for College Freshmen: 10 Tips to Prepare for Remote Learning

College freshmen in 2020 will undoubtedly experience one of the most unique college beginnings in history. Here are some tips to navigate remote learning. Casey Welch Co-founder and CEO of Tallo
Clear Clear All