In the fall of 2020, North Kingstown High School sophomore Olivia Wood wanted to draw something for art class inspired by her outrage over the police murder of George Floyd, a Black man in Minneapolis. As a White teenager in a predominantly White Rhode Island town, she’d been paying more attention to racism, like White students using the N-word around each other. “It’s just very ignorant and it was shocking to hear it,” she said.

Olivia found a “very powerful photo” of a protest after Floyd’s murder from the New York Times. It showed young people holding a sign that said, “White Silence Is Violence.” She made her own version in black and white, using a mechanical pencil on a sheet of printer paper.

The project could have ended there. But a year later, in the fall of 2021, Olivia’s art teacher, Janice Lee Strain, learned about an unusual contest. XQ and For Freedoms, an artist-led organization aimed at increasing creative civic engagement, were sponsoring a billboard challenge. They invited 14-21 year-olds across the country to design billboards addressing topics such as how to improve their schools, how they envision their future, or how to support social justice in education. “I knew in the back of my mind about Olivia Wood’s piece, that it was perfect,” said Strain.

Olivia was excited to enter the contest but she wanted to add more to her drawing. She had joined two activist groups, Students4Change and Towards an AntiRacist North Kingstown. She brainstormed with the groups about her billboard and came up with a slogan: “If children of color live it, then White children can learn it. Diversify Education.”

This month, Olivia’s billboard will be among the ten winners displayed in their communities across the country. Some billboards have messages promoting love and tolerance; another by a North Kingstown student says, “Stop Policing Female Bodies.”

The billboard challenge wasn’t just an arts contest. It was a deliberate part of XQ’s work with the Rhode Island Department of Education (RIDE) to improve and redesign the state’s high schools. That work relies on involving and listening to the students they serve.

Although Rhode Island’s four year graduation rate is around 85 percent, a 2020 Educational Opportunity Audit conducted by XQ found only six out of 10 of the state’s students were enrolled in the courses they needed to be considered college eligible.

“When you work in government, you assume that knowledge and data and things like that will lead to change,” he explained. But, “oftentimes it’s things that connect with them emotionally, personally, spiritually.”

This idea resonated with Keith Dysarz, XQ’s head of state and local partnerships. “This was about an opportunity to elevate and amplify voice and agency for students about what needs to change” in high school, he said. “To me this was an amazing opportunity to answer that question in a very different medium.”

XQ already held national challenges for 14-21year-olds around art, song, and dance, with BMike and Misty Copeland. But Dysarz wanted the Rhode Island arts project to have a more direct connection to kids’ educational experiences. For Freedoms works with adult artists in all 50 states to make provocative billboards. The organization’s co-founder and artistic director, Michelle Woo, thought this could work with teens. “We wanted the students to have the spaciousness to be able to dream a little and to really have space to creatively imagine,” she said.

Although the competition was national, XQ visited schools and arts organizations in Rhode Island last fall to spread awareness about the billboard challenge, based on our unique partnership with RIDE. A total of 171 submissions were eligible, and the top 10 winners were chosen based on community votes in XQ’s Billboard Challenge gallery.

Student Winners of Billboard Challenge Reflect on Their Designs

One winning billboard, by Adam Salem, parodies the colorful font of a Google search page to ask, “What do we know?” The 18 year-old senior at the Met school in Providence said he was troubled by how much time he spent searching the internet during remote schooling in the pandemic.

“I kept thinking, what do I know, what makes me qualified to make things or do things?” he said. “I did a lot of learning just through Google, through one company.” He also said his billboard is a commentary on disinformation.

Another student from North Kingstown High School, 15 year-old sophomore Elisa Hernandez, drew something more personal and political. Her “Stop Policing Female Bodies” billboard was inspired by protests over the school’s dress code, which prohibits showing midriffs. She said the code unfairly targets students who identify as female. “I wanted them to realize what ideas they were pushing onto these young students,” she said, “who are at a very impressionable age.”

Among the winners of the national XQ Billboard Challenge, North Kingstown sophomore Mame Ndoye’s work will be displayed in Rhode Island, too. The 15 year-old Senegalese student  wrote, “Can You Reach Help Yet?” with references to mental health, body positivity, and anxiety. She said she often feels different as an immigrant and as one of the few Black students at her school, but that the art club has been a welcoming place. Her dreams for high school include “A school with more Black people, people that are more accepting, people that are more open and friendly,” and more access to guidance counselors.

Woo, from For Freedoms, said the submissions “feel very heart driven.” That quality of the billboards also struck Osborn, at RIDE. “Our young people had very clear, very thoughtful ways of expressing things that we as adults are struggling to talk about with each other,” he said, adding that his agency will keep listening to students as it works to raise graduation standards this year.

The winning students said they’re anxious and excited to see how their billboards will be received. Olivia Wood said she anticipates some backlash for stating White students should have to learn what students of color experience. “But I also kind of welcome it because that means it’s making people think about it, hopefully,” she said.

The students hope their work can make an impact. Hernandez thinks there should be more contests for students to reach another level of influencer to promote change at school. Her suggestion? “Writing a letter to send to a Senator.”
XQ plans to launch a student journalism XQ Challenge later this year. Sign up for Give Me Five—our bi-weekly newsletter with resources to support transformation and information about upcoming events and challenges.

5 Ways to Bring Art + Activism to the Classroom 5 Ways to Bring Art + Activism to the Classroom

Since art is so important—how can we empower students through art? Here are 5 resources for you to use to empower your students. These 8 young women are changing the world through their activism work. Here’s their advice for young women who want to make an impact. 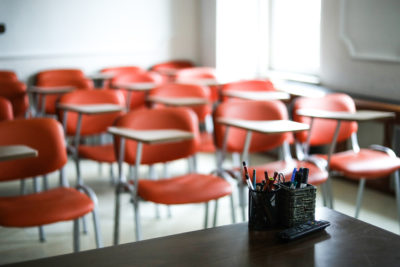