We asked readers on social media what they wanted to know about college loans, and we were inundated with questions – more than 500 of them. The issue is clearly on the minds of Americans of all ages, especially as another school year gets underway.

We’ve divided our answers into three parts. In this section we look at the big picture: policies and proposals, legislation and solutions. We hope you find this helpful as you and your family navigate the world of higher education.

What is the breakdown of tuition dollars for administration, instruction and student support services?

Each school is different, but in general for-profit and online colleges spend the least on instruction and the most on administration, advertising, consultants, travel, and other expenses not directly related to education. In fact, less than a third of tuition money goes toward instruction, according to a recent report by the Century Foundation.

Tuition breakdowns vary widely at private colleges. Some even spend more on instruction than they bring in tuition, covering the balance with money from donations and endowments. But others spend less than public schools, while charging higher tuition rates.

“Public colleges and universities are, overall, the best value from a teaching-per-tuition-dollar perspective,” according to the report. “Their support from state and local taxpayers frequently allows public institutions to spend more on instruction—sometimes much more—than they received in tuition revenue.”

If you’re curious about a specific school, check their budget. Most public and private schools post their budget materials online.

What can we do to help solve the student loan crisis?

But there is some good news, according to the National Association of Student Financial Aid Administrators. While some students carry debts of $100,000 or more, that’s not the typical story. The average debt for students hovers around $30,000 and has only increased incrementally in past years. A third of college students earn a degree without acquiring any debt at all. And half of those who do take loans are able to make their payments, didn’t borrow much to begin with, and can pay off their debt relatively quickly, the group’s CEO, Justin Draeger, wrote in an op-ed piece in Forbes.

The real crisis, he argues, is among low-income students who financed loans to attend “expensive, sub-par” colleges, never earn their degree or find the degree does not lead to a decent-paying job. Then they’re saddled with large debts that they lack the means to pay back.

What states and cities are getting this “right”?

Half the states in the U.S. offer – or are working toward offering – some kind of free college tuition program for students who need it. Twelve states have already established programs:

In addition, some cities, such as Chicago and San Francisco, have taken on the issue, filling in the gaps the state programs don’t cover. Read more about these programs and other efforts to reduce college costs at the Campaign for Free College Tuition.

Jessica Thompson, director of policy and research at the Institute for College Access and Success, noted that many of the “free college” programs have caveats, such as minimum GPA requirements or other restrictions. And many don’t cover the costs of housing, books, or other expenses. California’s program, she said, is on the right track: It gives community colleges some flexibility in how best to help low-income students, and includes an expansion of financial aid overall.

So while the “free college” programs show a lot of promise, some are more helpful than others, she said.

“To fulfill the intended promise of free college programs the federal government will need to re-imagine its relationship with cities and states – bringing not only new resources to the table, but keeping states from continuing to cut spending on public higher education while also helping them to weather the economic cycle better by stepping up even further during recessions,” she said.

Is the debt worth it?

Deciding whether to go to college is a personal choice, with many factors to consider besides money. For some, any amount of debt is worth the joy of higher learning – of studying Shakespeare with literature scholars, of assisting Nobel researchers, of discovering new interests and passions. For others, the friendships, networks, and social experiences are worth the cost.

But if you’re just looking at dollars, here are a few statistics from the National Association of College and University Business Officers, based on 2017 data, that can help you make the best choice for you and your family:

For those with a high school diploma: 4.6%

For those with a bachelor’s degree: 2.5%

For those with a high school diploma: $712

Poverty rate for those over age 25:

For those with a high school diploma: 13%

For those with a bachelor’s degree: 4%

Help! My kid wants to go to college and I have no money 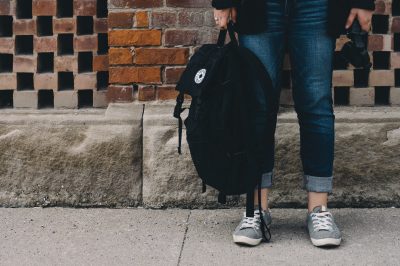 Learn how to get your finances in order with these well-explained financial basics. Help! My kid wants to go to college and I have no money

Wondering how you're going to help your student pay for college? You're not alone. Here is a place to start when asking the daunting question.