“For a lot of students, creating music and art is really about character development. I tell my students, are you able to speak your truth? If you’re able to do that, you’ll do well in life no matter what you do.”

Art has long served as a vehicle for self-expression, a means to articulate thoughts and feelings and share vulnerable parts of oneself with the outside world. It naturally follows that art and activism often intersect, forming a dynamic practice that encourages social change.

In fact, an increasing number of youth activists across the nation have turned to this blend of art and activism—artivism—to express themselves. Amanda Gorman pays homage to the work of female leaders past and present in her poem The Hill We Climb, H.E.R. stands by #BlackLivesMatter protests against police brutality in her song “I Can’t Breathe,” the late Cameron Boyce galvanized youth across the nation to protest gun violence in his provocative photography project “Wielding Peace.”

Click to see what young artists think about the future of schools.

Creating space for youth voices to make art about the issues they care about is paramount to their growth as leaders for social change and as engaged citizens. Recognizing this, XQ partnered with Oakland-based hip hop and R&B quartet SOL Development to create the #MakeASongChallenge.

We’d like to congratulate the following students, ages 16 and 17, whose submissions placed in the top five: Alex Guzman, Daniel Triggs, Corneria Greer, Violet Woodbeck, as well as Emry Herring, Jesus Garcia, and Jhaiell Kilgore. Their songs demonstrated unique artistry that deeply resonated with their fellow contestants, earning them the top five most upvoted songs of the challenge.

Through this challenge, students across the country engaged in creative expression and shared the issues they’re passionate about through artivism, making music about topics from mental health and self-love to police brutality and Black Lives Matter advocacy.

As the young people of today become the leaders of tomorrow, it’s important that we empower youth voice and choice and educate our students to engage in issues that impact their lives. For an increasing number of students today, art is the means by which they feel most comfortable and confident to voice the issues they champion. It’s crucial then that we support students across the nation as they begin to express themselves creatively, by creating and protecting arts education programs that give students a safe space to develop and explore their artistic side.

Seeking a World Without Gun Violence

16-year-old Fausto “Alex” Guzman, a student at New Design High School, took home first place in the #MakeASongChallenge with his song “Problems of the Public & Fears of the Private.” Guzman addresses police brutality, an issue close to his heart. His lyrics linger in the listeners’ minds well after the song is finished, serving as a solemn reminder of the emotionally scarring repercussions of police brutality on BIPOC: “The mass majority are treated like minorities / Keep the gun on the shelf, don’t aim at anybody else.”

Inspired by the work of the late MF Doom, Guzman makes a plea for change, calling on young people across the country to mobilize and shape the future world for the better: “A new system need inauguratin’ / Let the youth control the nation.”

Daniel Triggs, a 17-year-old student at Crosstown High School, similarly speaks to the disproportionate targeting of Black men by police in his song. Triggs demonstrates the creative power of artivism with powerful lyrics on how being a Black man in America has affected his life and self-image.

Triggs’ work of artivism builds empathy and understanding of the unique challenges he faces as a Black man. “Target” reminds listeners that amplifying youth voice and educating communities on topics such as racial bias and inequality play a critical role in creating a more just world.

17-year-old Corneria Greer from Crosstown High School addresses police brutality and racism in her song, “Levels,” placing third in the #MakeASongChallenge. Greers also encourages fellow youth to take the charge towards a more equitable future: “As an African American teenager, I feel it is my responsibility to explain to society how I feel about my people being killed by the people who are supposed to protect us. I am in the next generation of leaders, so I have to make it my duty to fight for our TRUE freedom and equality.”

Greer uses music to motivate youth activists across the nation to stand by and advocate for the #BlackLivesMatter Movement. With a flow of rhythmic precision that makes the impact of her lyrics all the more hard-hitting, Greer pays tribute to young Black lives lost to police brutality: “Michael Brown, Breonna Taylor, George Floyd, Tamir Rice / Sandra Bland, I know you hear ‘em weeping at night / If they won’t get no justice you won’t get no peace / Now we can go back and forth, or you can listen to me.”

A true artivist, Greer expresses her activist efforts through music. Her song is a testament to the power young voices have in raising awareness of and demanding action for critical causes. Music plays an important role in helping students find and develop their voice, and in Greer’s case, articulate their stances on the issues they champion.

Artivism does not necessarily need to shout loudly for change. It can also be thought-provokingly peaceful. This is clearly demonstrated in 16-year-old Violet Woodbeck’s song “What Did You Mean When You Said ‘Normal?’” A student at Grand Rapids Public Museum High School, Woodbeck plays with notions of normalcy as a way to encourage self-love and self-acceptance.

At a time when even our most mundane structures and routines are disrupted, Woodbeck sings about how she’s had to redefine what it means to be normal in a time of drastic uncertainty: “We’re taught to be normal…I want to be normal. I want things to be normal…but what does normal mean? Is normal real?”

Woodbeck’s rhetorical questions nudge her audience to embrace not being normal. “I think it’s important to evaluate what ‘normal’ really means to you (and to others) and whether it is a good or bad thing,” Woodbeck explains in the song description. “There is a lot of importance in accepting yourself and others, and embracing uniqueness and change.”

Woodbeck uses music as a way to understand and grapple with the speed at which the world can change and the resilience and stress management required to adapt to a changing world. She invites her audience to find their own interpretation for the song, taking them on a journey of self-reflection around individual and collective understandings of “normal.”

A trio of 17-year-olds from Grand Rapids Public Museum High School was the final winner of the #XQMakeASongChallenge. “Toxic Emotions” by Emry Herring, Jesus Garcia, and Jhaiell Kilgore advocates against toxic masculinity and addresses the harrowing consequences of toxic masculinity.

In a refreshingly honest appeal to the often-suppressed emotionality men feel they must uphold, Herring, Garcia, and Kilgore rap: “I would tell my friends I love them if I really did / I’m not one to mess around with these insecurities / It’s sure to me that you just think it’s weird because of toxic masculinity.”

In their artivism piece, these students shed light on hypermasculinity, open up the conversation surrounding mental health, and speak from personal experience about the pressures men can feel to hide their emotions. The trio bravely shares personal stories of feeling pressure to conform to gender norms, using anecdotes as a tool to advocate for cultural change and reduce stigmas around mental health and well-being.

Powerfully, the XQ Challenge provided Emry, Jesus, and Jhaiell the opportunity to transcend the barriers of masculinity and confront the confines of strict gender norms in a format that strengthens their voices.

Creating an Impact Through #Artivism

Artivism enables youth activists to explore the causes they champion and meld their love for art and activism to advocate for change. We can support young activists with access to arts education, which is ever critical for students who are constantly developing creatively.

As youth begin to take strong leadership roles in shaping the future, art will continue to serve as a powerful tool to help them share and bring awareness to the issues closest to their hearts.

Next up, XQ will be releasing our upcoming challenge on visual art and activism featuring Brandan “B-Mike” Odums. B-Mike has collaborated with brands like Nike, Cadillac, Spotify, and others. In 2020, B-Mike joined XQ in the TV show, Graduate Together to honor America’s high school graduates.

His work at Studio Be in New Orleans centers around encouraging students to imagine and shape the future in which they want to live. Through creative video lessons, B-Mike will tap into young people’s creativity and work to co-create solutions to pressing and urgent crises. Don’t miss out on this one-of-its-kind learning experience, and sign up for the Visual Art + Activism Challenge here. 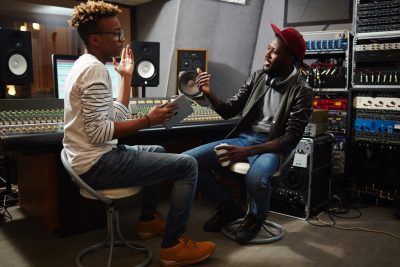 All students have the potential to do amazing things. This school gives students the tools they need to unleash creativity through music education and lead them to success.

This innovative arts high school in Rhode Island puts relationships at the center.