Jasmine Williams is a natural born artist. As a kid, she loved to explore her creative side through drawing, writing, and singing. However, she had a hard time seeing  a clear professional path for her natural inclination toward creativity. In fact, Jasmine didn’t see her creative dreams as a real career until she came across an after-school music program in her hometown of New Orleans.

“Upbeat prepared me with so much information and knowledge,” said Williams, who goes by the alias Odd the Artist. “I’ve always had the passion, but Upbeat gave me the connections and encouraged me to move forward.”

Upbeat Academy, a modern music education nonprofit focused on hip hop, rap, dance, and R&B music production for young people ages 12 to 22, not only taught Williams how to write and produce music but the business side, as well—how to market yourself, master social media platforms to reach a wider audience, create an album cover, plan a concert, and make your way in the music industry without relying on others.

Founded in 2012, Upbeat includes an after-school program at the George and Joyce Wein Jazz and Heritage Center, as well as music classes within local high schools, a youth homeless shelter, and a juvenile detention facility. The organization provides hands-on music instruction that allows their “student-artists to watch their musical aspirations come to life, graduate one step closer to their dreams, and very simply, for their voice to be heard,” according to Upbeat’s vision statement.

Hundreds of students from the New Orleans area have gone through its programs, learning the music business, making friends, and charting new career paths.

Numerous Upbeat students, including one from the juvenile detention facility, recently submitted songs for the XQ Music and Activism Challenge, an opportunity for students to write songs about issues that matter to them, potentially winning a chance to work with Oakland hip-hop quartet SOL Development.

Upbeat’s approach to teaching young people dovetails with the philosophy of XQ, particularly the importance of youth voice and community partnerships, critical thinking and collaboration skills, and preparing students for careers and life in the 21st century.

Music Education as a Pathway to Interdisciplinary Learning

At its core, Upbeat is about the music. Through music, students learn math, writing, technology, history and culture, and the fundamentals, such as rhythm, tone, and instrumentation. Upbeat’s director, Matthew Zarba, believes that music should be an integral part of every student’s education, and education through music can enrich a student’s life in countless ways.

“We’re not sending test scores and grades into society, we’re sending people into society. And a love and appreciation of music makes for well-rounded, versatile individuals,” he said.

“The great thing about music is that there’s no real endgame. You can learn new things forever. The journey really is the destination.”

Antonio Dennis, a junior at New Orleans Center for Creative Arts high school, had always enjoyed singing, painting, sculpture, and other visual arts, but music teachers at Upbeat Academy taught him how to hear music in a whole new way. He learned how to break down a song and listen to every beat, every lyric, every cadence.

In many ways, Upbeat Academy helped him unleash a creative energy he hopes to transform into a career.

“I started keeping notes, and writing down freestyle raps just based on things in my room,” he said. “There’s just so much to learn. The limit is not there. You can just keep going and going and going. That’s part of the excitement.”

Dennis said that in addition to two hours a day working on visual art, he spends at least three hours producing music, and sometimes stays up until 5 a.m. working on a song.

Ultimately, he’d like to study architecture and music production in college and pursue both careers. His dream? Building his own music studio.

Outlining a Career Path in the Music Industry

Throughout his childhood, Cyrus Burns was an avid musician, playing the trumpet and keyboard. But when he stepped into the Upbeat Academy music studio as an eighth grader, he learned a different side of a world he thought he already knew pretty well.

He learned the history and culture of hip-hop, how to mix sounds, how to use the latest software, but most importantly, how to listen. By learning to identify the fundamentals of a song, he felt he was hearing it in a whole new way.

“Before Upbeat, I would listen to a song and enjoy the feeling it evoked,” he said. “But now I’m able to break it down—hear the bass, the mix. Now when I hear a song, I understand it.”

Cyrus also appreciates the creative license and support that the Upbeat staff provides for students. “It truly felt like a safe place,” he said.

“You could just sit there for hours and hours, use the equipment, experiment with the technology, navigate the studio. It’s a space you can sprout into an artist.”

While Burns still writes music, he became increasingly inspired by other facets of the music industry. He started managing and promoting a few fellow musicians, and helped manage performances at the annual Buku Project, a music and arts festival in New Orleans that has a partnership with Upbeat Academy.

Now a junior in Loyola University’s music production program, Burns is interning for an entertainment marketing company called 1824 and planning a career in music production or promotion. He thanks Upbeat Academy for broadening his ambitions and exposing him to new fields in the music industry.

“Upbeat provides a space for people to connect with others who have the same interests, and express their ideas in a creative way,” he said. “To see that happen is pretty magical…Upbeat holds a special place in my heart.”

Williams is now a junior at Dillard University in New Orleans, studying music. She’s released several songs and plans a career songwriting, performing, producing, and marketing music. She credits Upbeat with showing her that her passion for music can lead to a meaningful, multi-faceted career. 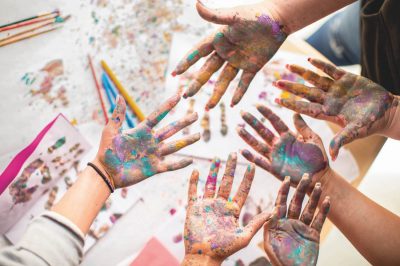 Amidst remote learning, these students are engaging in deep projects and learning filmmaking along the way. Here's how.